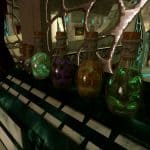 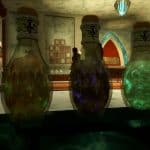 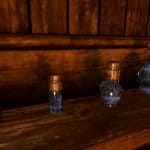 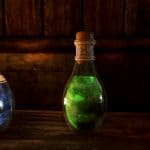 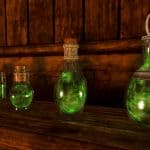 This mod will replace the models and textures for potions in the game for higher poly, higher resolution animated liquid versions. It is a back port of Revoith’s mod called Awesome Potions Simplified with tweaks to models, and textures done by me.

Reason for this mod:
I saw what Revoith had done in SSE using assets from Lucifonxx, and decided to lend a hand to refine it then obtained permissions to release it for SLE with my tweaks.

What does this mod do?:
This mod is a back port of Revoith’s excellent mod for SSE called Awesome Potions Simplified by Revoith with modifications done by me.
It changes all potions in the game for animated liquid models that look like filled glass bottles instead of boring solid color bottles.

What modifications did you make?:
Bottles have been resized to be larger and easier to see.
Meshes for bottles,metal, and liquid have been redone higher poly for smoother bottles without sharp edges.
Some of the textures have been redone by me specifically some of the metal parts, and cork. Resolution has been increased.

Installation, and notes:
Use your favorite mod manager or drop contents of the zip file into your skyrim data folder.

Notes:
These new models and textures are using vanilla file structure so basically a replacer.

2.0
Changed collison for fortify skill bottle to better match it’s shape.
Moved all of the second largest bottles down slightly to sit completely on a flat surface (matches collision)
Changed all colors for poisons so that they can be distinguished by color and different than stamina color.

Credits:
Lucifonxx for his original mod, and allowing Revoith to use resources from it
Revoith for his awesome mod for SSE and allowing me to modify it and release it for SLE

Special thanks:
SuicideCommando for play testing this for me since I no longer play SLE and have only a minimal installation of that vewrsion of the game on my computer.

Final thoughts:
Potions have always been kinda boring to me in Skyrim.
Yay! colored bottles. When I saw this I was inspired to spend some time refining it for my own use but also wanted players of SLE to be able to enjoy awesome potions as well.

This mod is opted in for donation points but 100% of them are going to Revoith.

Have you ever tried Skyrim Mods? All advanced players around the globe are fascinated by these additional options, which can solve various occurring issues. If you want to become a leading gamer, Skyrim Awesome potions Simplified LE Mod can be the key to success and make this happen faster. All you need to do is pick the needed file and simply add it to your game. This provides you with unseen features and enables you to deal with your workload in a smarter way. There are so many different Skyrim Special Edition mods on our site that you will need some time to try at least some of them. But it’s definitely worth every second spent because your game is being lifted to the whole new level. Every Skyrim mod of our database is the highest quality and meets the strictest requirements. This ensures that our visitors get access only to the most exclusive and useful files. One of the best things we can offer for our visitors is unlimited access to the vast variety of extra files, which provides a wide range of benefits. It’s a significant surplus which is essential in being competitive. If that is your main goal, you should definitely try at least one Skyrim Special Edition Awesome potions Simplified LE Mod file. You will be shocked how come you were missing this kind of important upgrades. But it’s never too late to give it a try and explore. Be one of the modern farmer and take the chance to all you can. These additional Awesome potions Simplified LE files will enable you to choose between the best equipment, weapons and other functionality available. Could you miss that opportunity? We doubt that, so no more hesitating, make a decision right now and boost your game instantly. There won’t be any regrets or disappointments – make your farm the leading one right now!