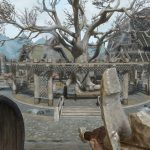 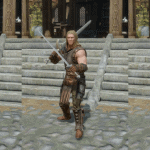 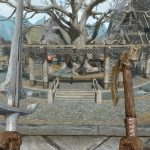 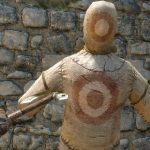 – Added a second swing for left hand weapons, to match the right hand behavior
– Attack speed is boosted by 30% (non-stacking) while standing still — adjustable in the MCM
– Attacks have a 50% chance to glance off a block instead of bouncing back, letting you attack again
– First person camera noise adds movement to first person view — adjustable in the MCM
– Fixes the sneak movement bug, drawing or sheathing weapons doesn’t make you move faster
– Removed the strafe animations from the movement behaviors (runstraferight, runstrafeleft) due to redundancy
– Adds a blocking hotkey for dual-wielding, magic in left hand, and unarmed
– A 360° combat mode is included for basic attacks with vanilla races, it will be finished in future updates

Nemesis is a tool that allows you to use multiple behavior mods together, there’s a patch included with CGO and instructions below

Modded staffs will not have sounds or hit particles, you can manually create a patch or use the zedit script (credit to cuyima﻿) provided here﻿

360 Combat requires changes to the vanilla races inside the esp. If you want to use this feature, you may need to create a patch with TES5Edit to fix a conflict with another esp file

FNIS is not compatible with CGO

How to Install & Use Nemesis

Video tutorial by JDM: How to install 360 Movement Behavior﻿ + CGO with Nemesis﻿

1. Download Nemesis Unlimited Behavior Engine Beta﻿ (make sure it’s not the SSE version)
2. Install Nemesis with your mod manager or manually extract the rar archive and place the “meshes”, “Nemesis_Engine”, and “scripts” folders inside your Data folder
3. Run “Nemesis Unlimited Behavior Engine.exe” through your mod manager or inside “Nemesis_Engine”
4. Click on “Update Engine” and let the patcher do it’s thing
5. Check off any mods you want to use
6. Click on “Launch Nemesis Behavior Engine” to generate merged behavior files

Have you ever tried Skyrim Mods? All advanced players around the globe are fascinated by these additional options, which can solve various occurring issues. If you want to become a leading gamer, Skyrim Combat Gameplay Overhaul Mod can be the key to success and make this happen faster. All you need to do is pick the needed file and simply add it to your game. This provides you with unseen features and enables you to deal with your workload in a smarter way. There are so many different Skyrim Special Edition mods on our site that you will need some time to try at least some of them. But it’s definitely worth every second spent because your game is being lifted to the whole new level. Every Skyrim mod of our database is the highest quality and meets the strictest requirements. This ensures that our visitors get access only to the most exclusive and useful files. One of the best things we can offer for our visitors is unlimited access to the vast variety of extra files, which provides a wide range of benefits. It’s a significant surplus which is essential in being competitive. If that is your main goal, you should definitely try at least one Skyrim Special Edition Combat Gameplay Overhaul Mod file. You will be shocked how come you were missing this kind of important upgrades. But it’s never too late to give it a try and explore. Be one of the modern farmer and take the chance to all you can. These additional Combat Gameplay Overhaul files will enable you to choose between the best equipment, weapons and other functionality available. Could you miss that opportunity? We doubt that, so no more hesitating, make a decision right now and boost your game instantly. There won’t be any regrets or disappointments – make your farm the leading one right now!