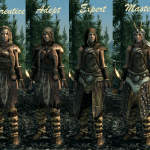 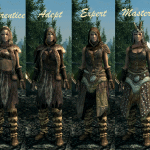 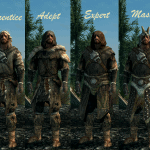 A mod that adds craftable and lootable fur clothing for mages to the game. Good for arcane adventurers that want to keep warm or have nothing to do with the College! Frostfall supported.

This is the version for Legendary Edition (LE)

FEATURES
This mod uses Vanilla assets only to add:

All items have zero armor rating and are classified as clothing, so mage characters can keep warm while they wander Skyrim in a way that won’t interfere with their Alteration-based ‘mage armor’.

How to get the items:

Loot — The enchanted items have a chance to show up in boss loot chests, and the rare bandit mages wear them. The unenchanted hand- and foot- wraps have a chance to show in normal bandit loot chests.
Merchants — Merchants that normally sell mage robes now sell mage furs and hoods, too!
Tanning Rack — You can craft them with the appropriate level of Enchanter perk and the materials as listed below.
Console — Run ‘help “mage furs”‘, “help “fur-lined hood”‘, or “help wraps” to find the s, then ‘player.additem 1’.

REQUIREMENTS
Uses Vanilla assets only. No DLCs or other mods required.
USLEP strongly recommended because it fixes the bug where “elk hides” are called “deer hides”. If you don’t have USLEP, you’ll have to keep track of your elk vs. deer hides yourself.

For the “Modded” female look:

For the “Modded” male look:

Comprehensive Sleeves Pack﻿﻿ (I did not do an exhaustive search for good male replacers. Feel free to leave recommendations in the comments.)

COMPATIBILITY
Supports Frostfall. Mods that replace the Vanilla models and textures on the following items are compatible AND will affect my mod. This is intentional.

I highly recommend using replacer mods if you want to avoid fur bikinis on ladies/freezing off your manly torso.

The crafting relies on Vanilla Enchanter perks, so I suspect this mod is NOT compatible with perk overhauls. It will also be incompatible with mods that edit:

NPC BEHAVIOR AND BALANCE
Though not fully playtested, I expect the following:

Stronger bandit mages (in the rare event that they spawn) because they now have access to mage-specific gear.
NPCs may comment on your poor state of dress if you’re wearing the Novice or Apprentice Mage Furs.
NPCs should NOT comment that you look like a ‘wizard or something’ or to be from the College.
NPCs that barter clothing or furs should (generally) be interested in these items. They should be priced similarly to Vanilla mage robes/hoods.
NPCs that barter armor should NOT be interested in these items.

Please let me know if you observe behavior contrary to this.

TheModGourmet﻿ for encouraging me into modding, testing my LE backport, and being a great cheerleader.
Parapets﻿﻿, iceburg﻿﻿, and DanielUA﻿﻿, whose mods appear in my screenshots and are linked in the ‘Requirements’ section above.
Arthmoor﻿﻿﻿, whose Alternate Start – Live Another Life﻿﻿ mod greatly facilitated the ‘quick testing’ experience and appears in my screenshots as ‘the camp’.

PERMISSIONS
You may translate or create patches for use with other mods as long as credit to me and a link to this page is given. If you want, contact me and I can post a link to your patch/translation or host the file(s) from this page. Please contact me directly to obtain permissions that don’t fall in these categories.

DISCLAIMER
This mod is not made, guaranteed, or supported by Zenimax, Bethesda Game Studios, or any of their affiliates.

Have you ever tried Skyrim Mods? All advanced players around the globe are fascinated by these additional options, which can solve various occurring issues. If you want to become a leading gamer, Skyrim Furs for Mages Mod can be the key to success and make this happen faster. All you need to do is pick the needed file and simply add it to your game. This provides you with unseen features and enables you to deal with your workload in a smarter way. There are so many different Skyrim Special Edition mods on our site that you will need some time to try at least some of them. But it’s definitely worth every second spent because your game is being lifted to the whole new level. Every Skyrim mod of our database is the highest quality and meets the strictest requirements. This ensures that our visitors get access only to the most exclusive and useful files. One of the best things we can offer for our visitors is unlimited access to the vast variety of extra files, which provides a wide range of benefits. It’s a significant surplus which is essential in being competitive. If that is your main goal, you should definitely try at least one Skyrim Special Edition Furs for Mages Mod file. You will be shocked how come you were missing this kind of important upgrades. But it’s never too late to give it a try and explore. Be one of the modern farmer and take the chance to all you can. These additional Furs for Mages files will enable you to choose between the best equipment, weapons and other functionality available. Could you miss that opportunity? We doubt that, so no more hesitating, make a decision right now and boost your game instantly. There won’t be any regrets or disappointments – make your farm the leading one right now!