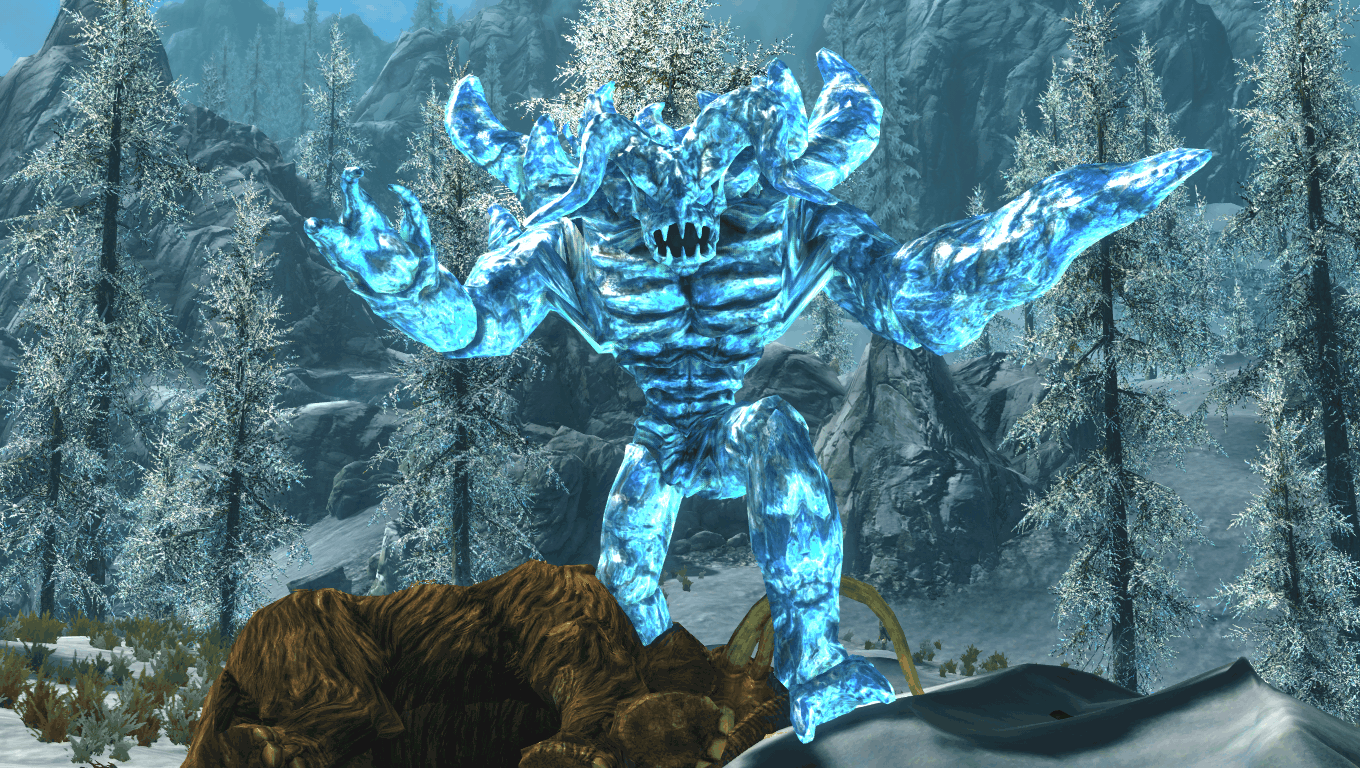 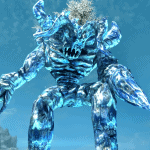 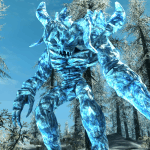 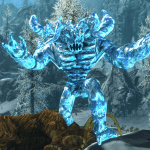 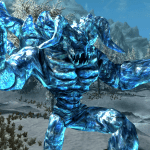 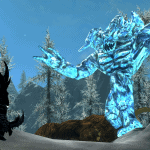 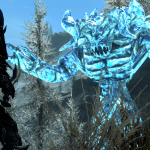 First appeared on TES Arena, the Ice Golems are giant sentient constructs made of pure ice and raised by
powerful sorcery. In reality, the creation of Ice Golems dates back to times no men can remember.

I general sense, Golems follow simple tasks, given to them by their masters, and in general they’re basically man-made simplier atronachs. Often, they are ordered to protect some place or item and they are still bound to this duty even when their masters are already dead for a long time. But this kind of ice- made golem seems to be specially hard to deal.
Some of the Ice Golems simply born unbound or get uncontrollable after some time of service and end killing
their masters and leaving into the snow forests. Some attempts to reproduce in current times the methods of creation
ended in gigantic golems engaging in killing rampages, destroying entire covenants. Maybe because they were
made too strong, maybe because in the current era mages are too weak, probably both

But indeed Ice Golems have a very strong and independent personality, what is rare to golems, that commonly are just made half sentient, and animated by magic, or artifacts, not having a human, animal or daedra soul inside them.
Despite this, the strength and resilience of Ice Golems is quite similar to other golems of the same size. They tend to be a bit faster and more agile compared to moss or stone golems but are not that heavily armoured. They are only able to survive in cold climate as Ice Golems will melt in warmer regions unless some kind of magic is applied to prevent this.
On the other hand, in cooler areas it is much easier to raise Ice Golems than their stone or fire cousins.

Since Frost Atronachs are also giant frost brutes, and more easely tamed, commonly mages no more try to create Ice Golems to serve as guardians. Due to that fact, the only ones that remain on the wild are the rare strayed ones from the past eras, and one or two recent experiments that have gone wrong for their creators. They live on the snowy forests and use mimetism and camouflage to ambush their prey. They spike a snowy pine tree on the top of their backs and remain buried on the snowy ground just with the pine outside, close to snow forest roads, when a human, carriage or animal approaches, they raise from the ground to freeze and eat the prey.

It is curiously strange to see golems acting like actual predators, since, as a rule, constructs do not experience hunger, thirst, or any other typical need for organic beings. But, not only do these ice beasts hunt and feed on their prey, they also seem to be modeled for precisely that typical animal function. While domesticated ice golems have less animal-like appearance, being more similar to a humanoid ice armor, a little larger than a giant, the feral ice golems found along Skyrim’s icy north are much larger, with giant claws made of hard ice, a huge mouth full of sharp teeth, and a torso covered in dangerous ice spikes, not to mention the aforementioned tree stuck in its back, used as a cover during their hunts. This adaptation to the environment generally occurs in stray ancient golems, which blend with the nature that surrounds them, until finally they dissolve in the element that originated them, returning one day to their base form, which can take ages, depending on the power of the own golem.

Due to this animalistic metamorphosis, some scholars speculate that these ice golems are actually possessed by nature spirits, such as powerful ice wraiths, or other similar creatures, but they are just speculations without proof. What is known is that these unusual characteristics and mutations place feral ice golems far above elemental golems generally equated, such as storm and fire golems.

This mod should be compatible with almost all other mods, but if you use HDT-SMP, please read with attention:
That mod (and similars) have incompatibilities with vanilla Lurker skeleton. When using that mods, an encounter with a Lurker commonly causes CTDs. Its an incompatibility between that mods and the lurker skeleton nodes, and there is a “fix” that modifies the Lurker skeleton to adapt it to HDT- SMP settings. I do not agree with that, and i believe the right way is to remove the settings on HDT-SMP and similars that interfeer on Lurker skeletons (and general creature skeletons). The available “fix” is not actually a fix because there is nothing to be fixed, since the skeleton works perfectly on vanilla skyrim, and it was made just for that, to work on vanilla skyrim.
This is specially true if you use the “fix” on creatures that use custom modified skeletons that used as root base the vanilla Lurker Skeleton, this is the case of this mod, and if you use the “fix”, you will mess completely the proportions and general look of this creature, since part of the model look is made on the custom modified skeleton.
So, or you do the node “fixing” (done on the “fix” for the lurker skeleton) on my creature skeleton, or you simply do not use it. I believe the settings that affect creature skeletons on HDT-SMP and similares are being removed to avoid this kind of conflicts, so probably all will be fine soon.

Have you ever tried Skyrim Mods? All advanced players around the globe are fascinated by these additional options, which can solve various occurring issues. If you want to become a leading gamer, Skyrim Ice Golem- Mihail Monsters and Animals (mihail oldrim mod) Mod can be the key to success and make this happen faster. All you need to do is pick the needed file and simply add it to your game. This provides you with unseen features and enables you to deal with your workload in a smarter way. There are so many different Skyrim Special Edition mods on our site that you will need some time to try at least some of them. But it’s definitely worth every second spent because your game is being lifted to the whole new level. Every Skyrim mod of our database is the highest quality and meets the strictest requirements. This ensures that our visitors get access only to the most exclusive and useful files. One of the best things we can offer for our visitors is unlimited access to the vast variety of extra files, which provides a wide range of benefits. It’s a significant surplus which is essential in being competitive. If that is your main goal, you should definitely try at least one Skyrim Special Edition Ice Golem- Mihail Monsters and Animals (mihail oldrim mod) Mod file. You will be shocked how come you were missing this kind of important upgrades. But it’s never too late to give it a try and explore. Be one of the modern farmer and take the chance to all you can. These additional Ice Golem- Mihail Monsters and Animals (mihail oldrim mod) files will enable you to choose between the best equipment, weapons and other functionality available. Could you miss that opportunity? We doubt that, so no more hesitating, make a decision right now and boost your game instantly. There won’t be any regrets or disappointments – make your farm the leading one right now!