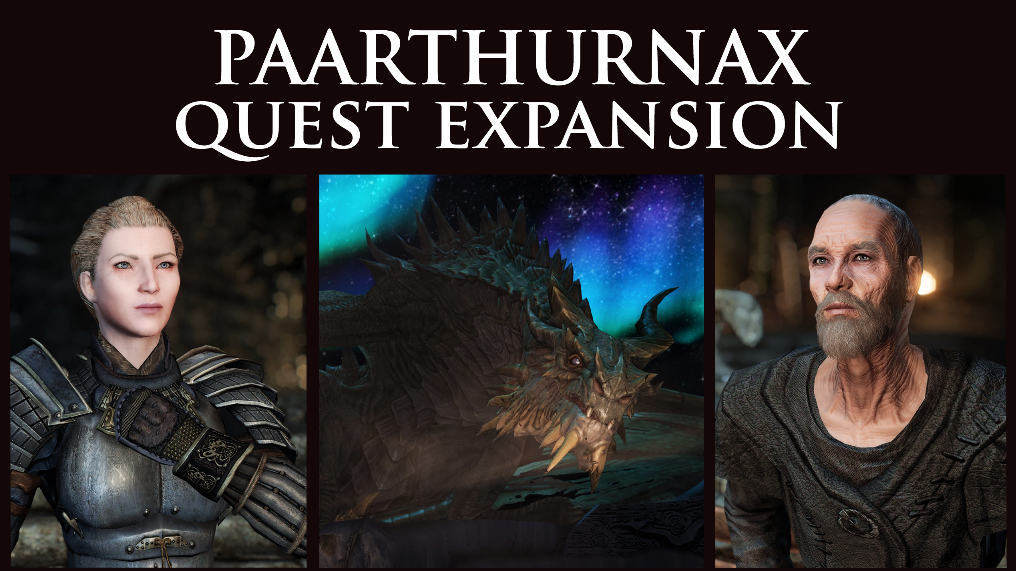 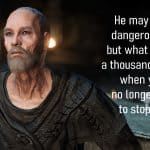 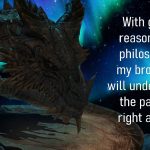 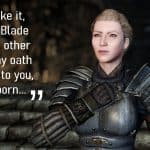 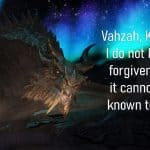 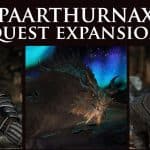 A fully voiced, quite expanded new take on the quest Paarthurnax, giving both the Blades and Paarthurnax good reasons for their stances, and you, Dragonborn, the final choice.

PAARTHURNAX QUEST EXPANSION
Another take on the Paarthurnax quest. Yes, this has been done many times, I know. Plenty of approaches to this already: The Paarthurnax Dilemma, The Paarthurnax Ultimatum, Paarthurnax Choices plus3, Paarthurnax Bypass, Spare Paarthurnax…
So what’s different here? I cannot focus on the differences, cause I have not used many of those mods, but here’s what my mod brings to the table:

FEATURES
– Fully voiced. Not with xVASynth, but vanilla lines. It is not perfect, but I’d argue it’s pretty close to vanilla quality. My goal was to have it as seamless as possible, so the player wouldn’t know where my mod starts, and where vanilla ends. It will depend on how good your headset is haha

– Around 60(!) new dialogue voice lines. This pretty much doubles the length of the quest and answers the (imo) biggest plot holes and discrepancies. But most importantly it gives you a lot more context for you to decide between making the blades see reason or having Paarthurnax answer for his crimes.

– Expanded Context. What I hate the most about the vanilla aproach to this quest is that nobody makes sense and I cannot ask or say the right things.

– Delphine is being super stupid. The blades should serve ME. Their purpose is to serve and protect the Dragonborn, so stfu.
– The Blades have a point: It could be risky to let Paarthurnax live, but this is not conveyed in the vanilla game at all. The blades just want revenge.
– What does Paarthurnax believe about his past actions? Does he feel remorse? Does he believe he deserves forgiveness?
– What is Paarthurnax planning now that Alduin is out of the picture? Why are other dragons starting to follow him?

– A Grey Choice. (Please, don’t hurt me, Skyrim community) The final decision is of course up to you. In vanilla, it was crystal clear. Fuck the blades. But by building on top of the lore and the content that is there, I have made things bit more grey with this mod. The player will have to consider the pros and cons. Paarhurnax is our bro, he has helped us defeat Alduin not only now, but also back when the entire Skyrim was suffering under his yoke. However, it is difficult to forget the thousands of innocents that fell under him. His name means literally Ambition Overlord Cruelty. It would be as if a certain guy with a funny moustache escaped the most terrible war and decided to become a friendly monk living in austerity and isolation until old age, where he dedicates the rest of his life to helping children with cancer. Yes, he seems to have changed, but does this expiate him for his terrible, terrible crimes? Do mass-murderers deserve forgiveness after extremely heroic actions? Should we judge him for what was him following his intrinsic nature? Would we judge the wolf for killing a sheep? And then there’s the topic of risk and manipulation. What if Paarthurnax was patiently waiting until the only possible obstacle on his way, a Dragonborn capable of not only tearing his flesh, but also his immortal dragon soul is out of the picture? What if he means good now, but changes his mind down the line? These are topics explored, as much as I could, in the in-game dialogue.

A Good Conclusion, Either Way:
– SPARE PAARTHURNAX (SHUT UP DELPHINE!) If you decide to spare Paarthurnax, you will have the pleasure of FORCING Delphine tell you word by word what the purpose of the blades is and what her place is. Basically saying to her face: “STFU. I’m the boss.” After reminding her of her duty, she will, very reluctantly, accept your decision, but not before asking you to talk to Esbern, your last obstacle before completing this quest. Esbern will give you more sensible reasons for the blades’ request and will not back down easily. Some shouting might be required to have him drop the subject and finish the quest… or you might let him convince you. If you decide to spare Paarthurnax, both the Blades and the Greybeards services will be available to you.

– KILL PAARTHURNAX (BOSS FIGHT!): If you decide to bring Paarthurnax to justice, he will tell you he accepts your challenge, but his new students will NOT stay on the side, so be prepared to fight him and 2 other dragons at the same time. Paarthurnax and friends have not been altered, so they remain vanilla level and difficulty, HOWEVER: This will be a proper boss fight. Not only because of the increased difficulty of 3 freaking dragons, but also cause Paarthurnax and his friends will have special dialogue lines during the battle. Paarthurnax will not go down without a fight.

FULL QUEST PLAYTHROUGH
If you don’t wan’t spoilers and want to play the expanded quest yourself, just check a couple of seconds to see the quality of the audio.
As you can see by the duration of the video, this mod expands the quest quite a bit.
Boss fight voice lines are at the end.

COMPATIBILITY
I have touched as little as possible. But naturally, this will not be compatible with other mods that touch the Paarthurnax quest (MQPaarthurnax). You will have to choose one. I don’t touch other quests, so everything else is compatible.

FAQ
What’s the difference between this and X?
This is my approach, I’m not sure about the others, sorry. If the description appeals to you, feel free to give it a try.

Safe to install or uninstall mid-game?
As long as the quest (Paarthurnax) has not yet started, it is safe to install mid-game. Uninstalling mid-game is not recommended (as with all mods) but all my changes for this mod are super self-contained and minimalist, so I doubt anything bad would happen. 99% of this mod is just dialogue additions.

Why this mod now?
That’s an easy one! I had The Paarthurnax Dilemma installed since… well, forever. But I haven’t played the MQ since 2012 at least… So I didn’t even know the mod wasn’t voiced, and this is a very personal choice but I’m not a fan of non-voiced quests… they really take me out of the experience.

The fantastic Voice Addon for TPD by Murrayj came out recently, and it’s a great addition to Arthmoor’s mod, but I was not digging the xVASynth voices too much. I volunteered to help try to make them less robotic, but when I was looking into the available vanilla dialogues I realized there were a lot of dialogue lines that could be reused to make something new… more in line with what my ideal Paarthurnax resolution would be. Armed with audacity, pen, paper and lots of patience, I got to work and now here we are.

Have you ever tried Skyrim Mods? All advanced players around the globe are fascinated by these additional options, which can solve various occurring issues. If you want to become a leading gamer, Skyrim Paarthurnax – Quest Expansion Mod can be the key to success and make this happen faster. All you need to do is pick the needed file and simply add it to your game. This provides you with unseen features and enables you to deal with your workload in a smarter way. There are so many different Skyrim Special Edition mods on our site that you will need some time to try at least some of them. But it’s definitely worth every second spent because your game is being lifted to the whole new level. Every Skyrim mod of our database is the highest quality and meets the strictest requirements. This ensures that our visitors get access only to the most exclusive and useful files. One of the best things we can offer for our visitors is unlimited access to the vast variety of extra files, which provides a wide range of benefits. It’s a significant surplus which is essential in being competitive. If that is your main goal, you should definitely try at least one Skyrim Special Edition Paarthurnax – Quest Expansion Mod file. You will be shocked how come you were missing this kind of important upgrades. But it’s never too late to give it a try and explore. Be one of the modern farmer and take the chance to all you can. These additional Paarthurnax – Quest Expansion files will enable you to choose between the best equipment, weapons and other functionality available. Could you miss that opportunity? We doubt that, so no more hesitating, make a decision right now and boost your game instantly. There won’t be any regrets or disappointments – make your farm the leading one right now!