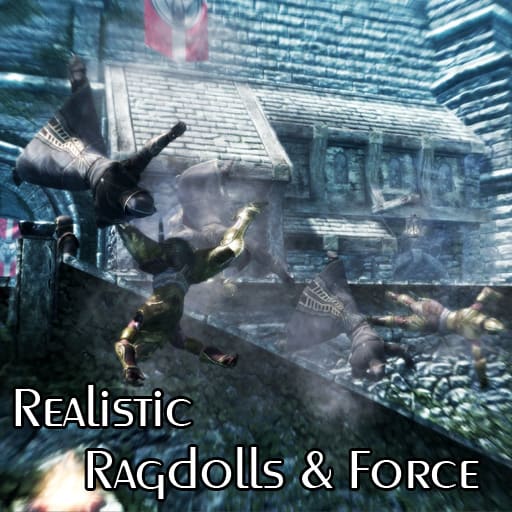 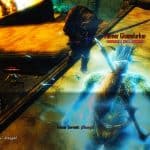 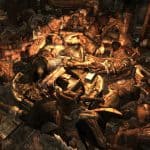 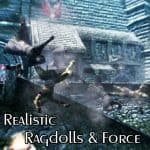 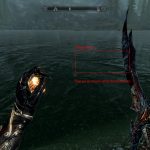 ESP plugin)Reduces the extra force applied on ragdolls to a more reasonable level
(MESH)Replaces ragdolls so that they bend and twist realistically and fall at a faster velocity, and increases friction to fix ice-like ragdoll sliding

CONFLICT: to clarify
You should always allow other mods to replace my mod’s skeletons

The plugin is only used for force strength. You do not need this for ragdolls to function but it will be harder to lift bodies, or if you want to change how much force is applied to ragdolls.

if you have no idea what you are doing, or do not know if a skeleton will conflict or replace each other then use the plugin only version

Ragdolls will conflict with other mods that change the skeleton.nif
You can either use the Custom Skeleton Replacers or XP32 as they have included the skeleton settings from this mod.

XPSME – Includes the realistic version plugin settings so you don’t need to install this mod. You will only need this mod if you want a different force setting or the animal and creature ragdolls:
https://dl-file.com/nd91l1m01kqn/New_Animation_pack_-_NMM_Installer_-_v2013-1-8-29622-2013-1-8.7z.html

ESP:
-Reduces the amount of force for ragdolls to realistic level with different force options to choose from
-Fixed glitch with lightning spell duration causing ragdolls to launch themselves when killed with any weapon
-Arrows will no longer push bodies far away when killed with stealth damage
-Realistic ragdoll reaction from melee hits. Higher the final hit damage the more force is applied
-Magic no longer sends people flying 20 feet away
-Unrelenting Force Shout should still send ragdolls flying

Ragdolls:
-Less stiffness to overall limbs of ragdolls by increasing their bend and twist radius.
-Weight increase for most ragdolls for realistic fall velocity
-Increased friction. Ragdolls had almost no friction which resulted in ice-like sliding.
-Fixes kneeing upright ragdolls and other odd poses for humanoids due to arms and legs being overly stiff
-Back spine loosen up a bit
-Increase neck twist and bend radius
-Arms are now able to twist behind the back

V1.9
-Updated humanoid ragdolls to match changes made in patch 1.8.
-Minor neck and spine changes
-Removed dragon, skeever, and horse ragdolls. (You should remove these files if you installed manually)

V1.8
-Fixed male humanoid ragdoll arm twist radius not matching with other ragdolls
-Adjustments to twist radius, angle cone, friction and mass for legs and arms of humaniods
-Increased Z grab lift strength, you will still need to grab the upper torso or center area of the ragdoll to be able to fully lilt bodies

V1.6
-Falmar ragdoll changes to fix left knee from bending the wrong way, reduced twist on back to fix chest deformation, and loosen neck
-Weight increase to bear
-Reduced troll’s default arm angle cone and elbow that cause it to bend in unnatural ways
-Fixed male humanoid ragdoll neck not matching with female ragdolls
-Added plugin for increase fall damage to about x2

Pick only one of the main download forces to install.

extract the files into:
…\Steam\steamapps\common\skyrim

If you have no “data files” option in the launcher

Find [Launcher] and add this line below it:
bEnableFileSelection=1

Realistically, arrows do not apply force on bodies and will crumple to the ground. Should be more satisfying and less cartoonish. Basic magic attacks also apply, such as getting hit with a lightning strike will fry you and not push you away. There is an optional file to apply a bit more force if you desire.

Q: Player sent flying when going into ragdoll (Knockdown, killed, ect…)
This is a known issue with “Enhanced Camera” mod. Use the fix that is found on that mod page.

Your FPS needs to be capped at 60. The game’s physics is not designed to handle FPS above 60.

Q: More force for magic and less for arrows?
Magic and arrows share the same force value so I can’t make one have more force than the other.

Q: Paralyzes spell on death cause ragdolls to become statues(stiff)
It’s a vanilla bug with that spell. use this Mod: http://www.nexusmods.com/skyrim/mods/34108/?

Q: Ragdoll arms do not raise above their shoulders.
There will be some bad deforming of the shoulders if I allowed this.

Q: Can’t lift bodies
It depends on what part of the body you grab usually the upper torso is where it’s easy to lift bodies. If you don’t use the plugin file you may not be able to left bodies.

Q: Ragdolls are still sliding on certain surfaces
The friction of the ragdolls are already high. The problem is that when they interact with meshes, such as, rocky stone paths or certain spots in the landscape that appear as grass but are actually giant rock meshes, will still cause ragdolls to slide unrealistically.

Q: Skyrim intro cart issues
I cannot confirm these issues. It’s mostly caused by conflicting skeleton meshes. Make sure that you let other mods replace the skeleton.nif from this mod, even if it’s for a compatibility patch. Higher framerate than 60 will cause issues with physics.

Have you ever tried Skyrim Mods? All advanced players around the globe are fascinated by these additional options, which can solve various occurring issues. If you want to become a leading gamer, Skyrim Realistic Ragdolls and Force Mod can be the key to success and make this happen faster. All you need to do is pick the needed file and simply add it to your game. This provides you with unseen features and enables you to deal with your workload in a smarter way. There are so many different Skyrim Special Edition mods on our site that you will need some time to try at least some of them. But it’s definitely worth every second spent because your game is being lifted to the whole new level. Every Skyrim mod of our database is the highest quality and meets the strictest requirements. This ensures that our visitors get access only to the most exclusive and useful files. One of the best things we can offer for our visitors is unlimited access to the vast variety of extra files, which provides a wide range of benefits. It’s a significant surplus which is essential in being competitive. If that is your main goal, you should definitely try at least one Skyrim Special Edition Realistic Ragdolls and Force Mod file. You will be shocked how come you were missing this kind of important upgrades. But it’s never too late to give it a try and explore. Be one of the modern farmer and take the chance to all you can. These additional Realistic Ragdolls and Force files will enable you to choose between the best equipment, weapons and other functionality available. Could you miss that opportunity? We doubt that, so no more hesitating, make a decision right now and boost your game instantly. There won’t be any regrets or disappointments – make your farm the leading one right now!