Reforging – To the Masses (Weapons Expansion) 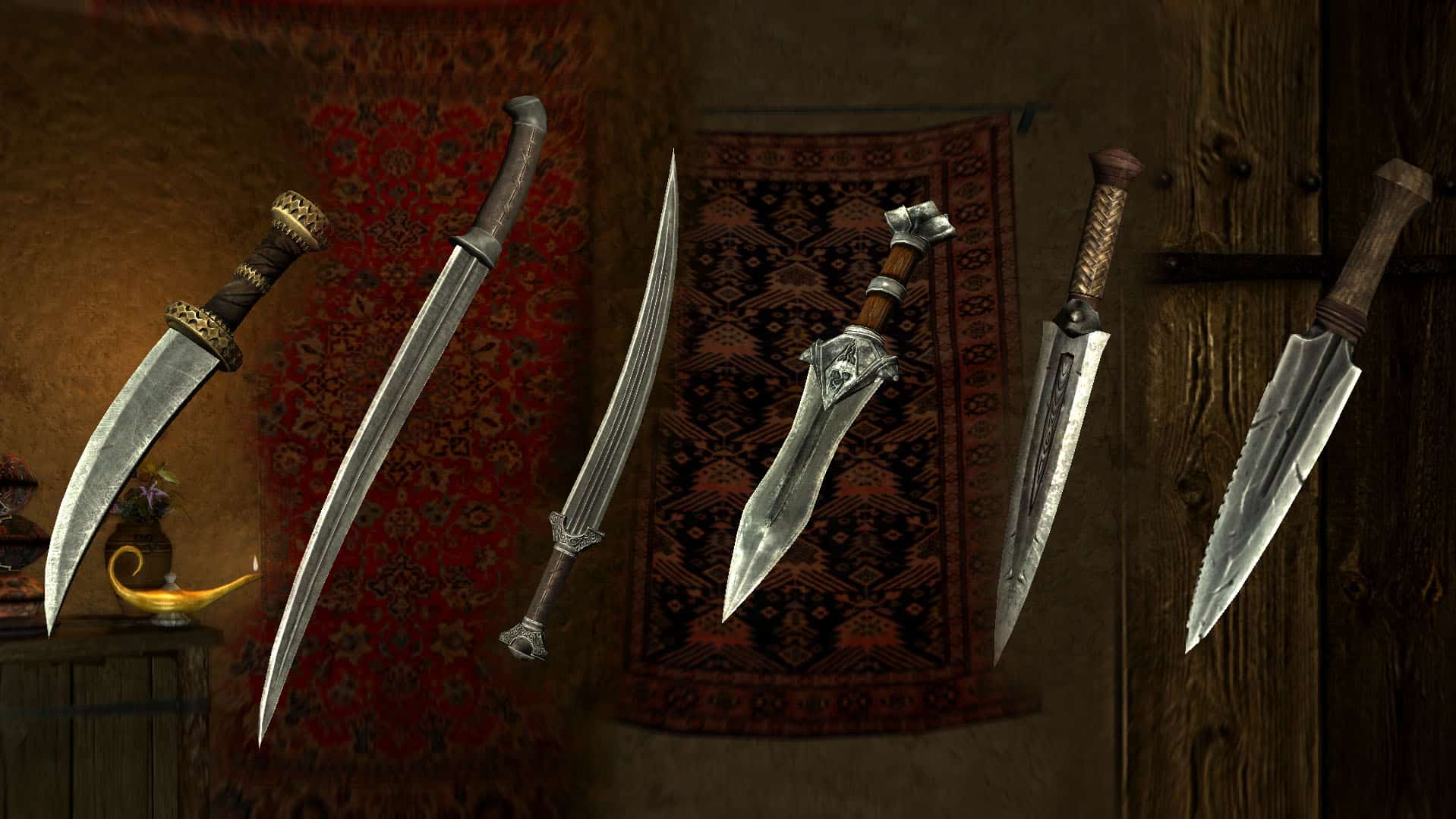 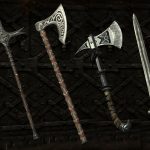 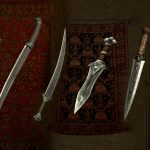 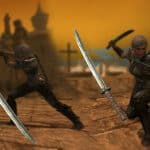 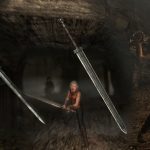 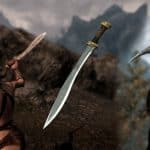 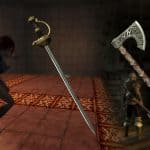 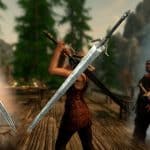 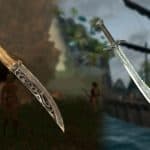 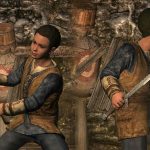 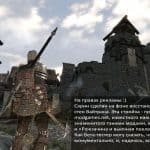 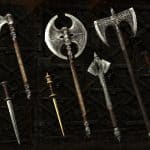 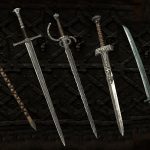 RFM adds around 300 vanilla-friendly weapons to the game. Made by registrant.

I always want to add more variety of weapons in my game, and I finally got time to translate this awesome expansion by registrant. All credits go to him.
The LE version is provided by dzee349. Kudos to him!

Reforging – To the Masses adds around 300 vanilla-friendly melee weapons to the game. Including daggers, axes, maces, swords, battleaxes, which can be found, taken from opponents (almost everything in the level lists), and also forged if you have the appropriate blacksmithing skills, or when certain conditions and quests are fulfilled * (see below).

All the weapons use vanilla textures so they will benefit from any weapon retextures you use.

You may see below artbooks for better preview of all weapons. (I only uploaded part of the weapons screenshots, so you definitely want to check the artbook for full preview).

Disclaimer: The original author registrant did a lot of research in naming all those 300 weapons with a lot of historical reference. However not all of
them even have English translation, so many aspects of the mod may be lost in translation. The original Russian version is a more authentic
version.
I did try my best to translate with consultation from registrant, though some of the content may still not be 100% accurate due to my rough translation and limited knowledge. If you are knowledgeable in Russian or historical weapons please feel free to improve the translation and let me or registrant to know.

Below are the machine translation of the original mod page description. (In-game weapon names are different)

The purpose of the mod was not to equip Dovahkiin with a superweapon, but to give the Skyrim arsenal a variety and authenticity within the lore.
The damage of a weapon is slightly higher than a similar one in material, but if you think that it is rather weak – use my handicraft ” Dream of a Dwarf Blacksmith”.

Installation and removal: standard. There is a version for the Legendary and Special editions in the archive.

* To create some weapons, the player must be in a certain place, or fulfill certain requirements. Several unique items can only be found Below is a
brief description of the locations and conditions.

Akavir weapons are forged after completing the quest “Alduin’s Wall”. It is rare in the world.
Alik’r and the Redguard Rapier – “A Time of Harmfulness,” by any means. Or take it from the Alik’r and pirates.
Old Norse, Nordic, and Dragon Priests – Complete the Companions quest
(don’t forget to talk to Yorlund to complete), or take it from the
Draugr and Dragon Priests.
Caster’s two-handed: Shining – Meridia’s quest, Nightingale – the return of the Skeleton Key.
Imperial – only found in the forge of Solitude, but can be found in the world.
Ka Po’Tunskoe – can be forged after returning the Lunar Amulet to the cat Karjo. Does not occur in the world.
Bloody Horkers – forge after the defeat of their base, or take away from the pirates.
Guardians of the Dawn – at Gunmar’s Forge at Fort Dawnguard at the Dawnguard patrol.
Silver – requires the skill of a blacksmith-wizard. Can be taken from the Silver Hand warriors.
Hrotmundovo – Complete the Thirsk quest in any way. Forge only on the territory of Solstheim.
Ricklings – in their huts, or forge in the forges of Solstheim, completing the Thirsk quest in any way.
Atmor sword – forged in the Heavenly Forge from rusty, which lies in the Ingol barrow (the Companions quest is not required).
Stiletto of the court bard – after returning her flute to Panthea.
Moth Priest Stylet – can be forged if you have an Elder Scroll in your inventory (will not be spent).
Stiletto of Grief – can be forged by joining the Dark Brotherhood or by destroying it.
Jeweled Sword – if more than a million coins have been accumulated (coins will not be spent).
Nerevaril – forged in the Aetherian Forge. Does not occur in the world.
Claymore Silver-Eyed – Lies in the Kronvangr Lair, or forged in the Heavenly Forge at midnight.
Firehair’s Claymore – in the Evening Cave spider-hole, or forged in the Skyforge at midnight.
Claymore Blade-Eared – at White Ridge Sanctuary, or forged at the Heavenly Forge at midnight.
Finnish knives with a typesetting handle and an imperial symbol – complete the quest “No one can escape from Sidna” in any way. Occasionally found at the leaders of bandits.
Sword of the Invincible – forged in the Heavenly Forge from the debris that lies in the Lair of the Reaper, in the Cairn of Souls (Companions quest is not required).
Nordic two-handed sigil – for forging complete the Tharstan’s quest from the village of Skaal “The Lost Legacy”. Does not occur in the world.

In addition, despite these conditions, almost all weapons (except for the unique one) can be used in vanilla radiant quests to recover lost
relics. So do not be surprised if Vilkas instructs you to find rogue trash
And, of course, the most reliable source of new hardware is bandits.

UPDATE 2.0:
Added a lot of bludgeoning (and not only) weapons.
Added loading screens describing the conditions for crafting / searching for special and unique weapons, and some other implicit properties of the mod.
Restored the lost increase in damage to undead from silver, as well as to elves from the weapon that was provided for by the concept.
Rogue weapons from the mod do 20% more damage to nords.
Upgrading Rogue Sword now requires Mammoth Tusk (Bone Blade is easier to replace than fix).
To forge orc weapons from the mod, you no longer need to complete the quest of the Markart orc blacksmith “Tempered in blood”, it is enough to have the skill of forging an orc.
Silver weapons from the mod can now be taken from the Silver Hand warriors.
Reduced damage for daggers to reduce the likelihood of a situation when a Nepys wields a knife instead of an ax or mace.
Added scabbards to some two-handed ones.
Fixed collisions for all weapons, now models correctly rest against surfaces, do not fall through, and do not fly.
The lists of distribution of weapons to the population have been supplemented (drakostey, nordic weapons will be more common; Finns with
typesetting pens will occasionally carry bandit leaders with them; Akavir weapons will also be encountered, but very rarely)
Some models have been reworked.
The line about increased damage to undead and vampires has been removed from the inventory description of silver and guardian weapons – so as not to interrupt information about self-enchanting. The increase (+ 20%) damage itself is effective.
Sharp beaked weapons – pick, pick and ice ax – can deal 50% increased critical damage; klevtsy – ignore half of the enemy’s armor.
Changed (for technical reasons) the condition for forging Finnish knives (iron section of the forge) with a type-setting handle and an imperial symbol – now you don’t need to sit behind bars for 10 and 15 days, it is enough to complete the quest “No one can escape from Sidna”.

Notes:
The author does not claim infallibility and strict adherence to the lore of the scrolls, etc.
Will there be a conflict with another mod that also adds weapons to the leveled lists? I would not call it a conflict, you will still find my
pieces of iron, tk. they are scattered quite widely. It just makes sense to patch Wrye Bash for better sharing of these mods.
This mod includes almost all weapon models from my old Reforging project . They can be used together, there will be no conflicts.
The mod does not contain its own textures, all weapons are used only by game ones. So if you have a pink steel sword retexture installed, don’t blame me
The questions have repeatedly arisen – why is no ingot needed to sharpen swords? Because sharpening is the removal of a
layer of metal, not application. IMHO.

Compatibility
The mod edited level list and NPC records. You should always check with Xedit if you are using any loot mod of mods that edit the same NPC.
I won’t be providing supports for other loot mods as I use my own mod “Open World Loot”, which should be releasing soon.

Have you ever tried Skyrim Mods? All advanced players around the globe are fascinated by these additional options, which can solve various occurring issues. If you want to become a leading gamer, Skyrim Reforging – To the Masses (Weapons Expansion) Mod can be the key to success and make this happen faster. All you need to do is pick the needed file and simply add it to your game. This provides you with unseen features and enables you to deal with your workload in a smarter way. There are so many different Skyrim Special Edition mods on our site that you will need some time to try at least some of them. But it’s definitely worth every second spent because your game is being lifted to the whole new level. Every Skyrim mod of our database is the highest quality and meets the strictest requirements. This ensures that our visitors get access only to the most exclusive and useful files. One of the best things we can offer for our visitors is unlimited access to the vast variety of extra files, which provides a wide range of benefits. It’s a significant surplus which is essential in being competitive. If that is your main goal, you should definitely try at least one Skyrim Special Edition Reforging – To the Masses (Weapons Expansion) Mod file. You will be shocked how come you were missing this kind of important upgrades. But it’s never too late to give it a try and explore. Be one of the modern farmer and take the chance to all you can. These additional Reforging – To the Masses (Weapons Expansion) files will enable you to choose between the best equipment, weapons and other functionality available. Could you miss that opportunity? We doubt that, so no more hesitating, make a decision right now and boost your game instantly. There won’t be any regrets or disappointments – make your farm the leading one right now!