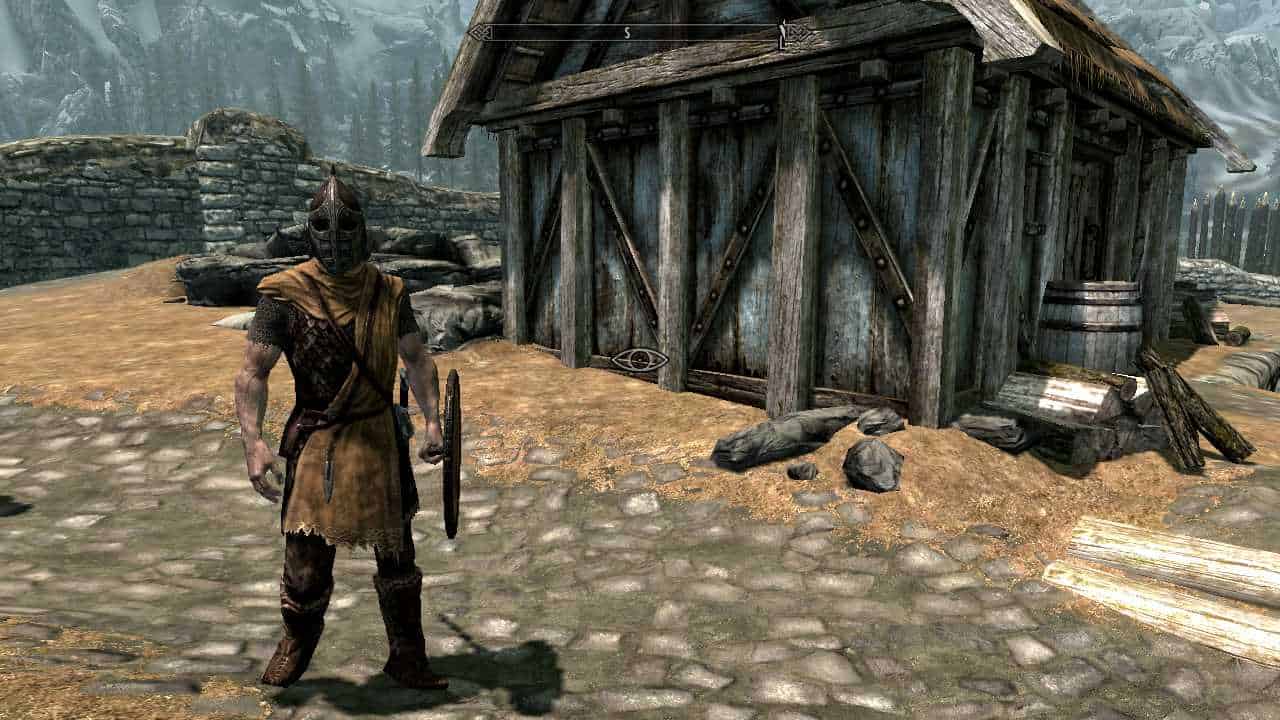 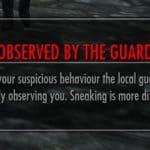 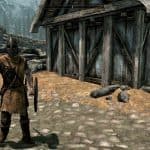 Guards will become suspicious when they see you sneaking around.

Have you ever wondered why the city guards won’t react when you start acting shady right under their nose?

With this mod the guards will become suspicious when they see you sneaking around town. They won’t arrest you right away but they will follow you and watch more closely what you are doing.

Now thieves and thugs have to look out for guards while sneaking. No more entering sneak mode and waiting for the guards to leave the area.

When you are detected while in sneak mode or with weapons drawn the guard who detected you will start to observe you. If you commit a crime while under observation you will be arrested or fined immediately otherwise the guard will just follow and watch from a distance.
Sneaking around inside buildings or with weapons drawn ( assassin style ) is not tolerated anymore. The guards will warn you once or twice and then charge you with trespassing.
The observation stops when you manage to hide for a little while, when you leave the city or when you
enter your home. You can also choose to act normal until the observing guard gets bored. However this is not recommended if you are a wanted criminal.

Only one guard will observe you at a time. Another guard may provide backup.
Sneaking is more difficult while you are under observation.
Guards will not follow you out of the city. They guard the city. If you leave it’s not their problem anymore.
Stables just outside the city walls (or anything up to the place where the Khajiit set up their camp) might belong to the city.
Not all guards will notice you sneaking. Especially in the bigger cities there will be a few guards ignoring you. I could easily bump the alias count to 50 so that all guards get the AI package but I think it’s realistic that the bigger the city the more lazy the guards.

MOD status: finished
Cleaned: yes
Script load: low
Compatibility: high (no vanilla records touched)
Dependencies: skyrim.esm
Install/Uninstall: Travel to High Hrothgar, wait until Masser and Secunda line up then save your game and toggle the mod on/off. Ok, not funny 🙂 Seriously, it should be save to (un)install this mod anytime/anyplace.

Have you ever tried Skyrim Mods? All advanced players around the globe are fascinated by these additional options, which can solve various occurring issues. If you want to become a leading gamer, Skyrim Suspicious City Guards Mod can be the key to success and make this happen faster. All you need to do is pick the needed file and simply add it to your game. This provides you with unseen features and enables you to deal with your workload in a smarter way. There are so many different Skyrim Special Edition mods on our site that you will need some time to try at least some of them. But it’s definitely worth every second spent because your game is being lifted to the whole new level. Every Skyrim mod of our database is the highest quality and meets the strictest requirements. This ensures that our visitors get access only to the most exclusive and useful files. One of the best things we can offer for our visitors is unlimited access to the vast variety of extra files, which provides a wide range of benefits. It’s a significant surplus which is essential in being competitive. If that is your main goal, you should definitely try at least one Skyrim Special Edition Suspicious City Guards Mod file. You will be shocked how come you were missing this kind of important upgrades. But it’s never too late to give it a try and explore. Be one of the modern farmer and take the chance to all you can. These additional Suspicious City Guards files will enable you to choose between the best equipment, weapons and other functionality available. Could you miss that opportunity? We doubt that, so no more hesitating, make a decision right now and boost your game instantly. There won’t be any regrets or disappointments – make your farm the leading one right now!