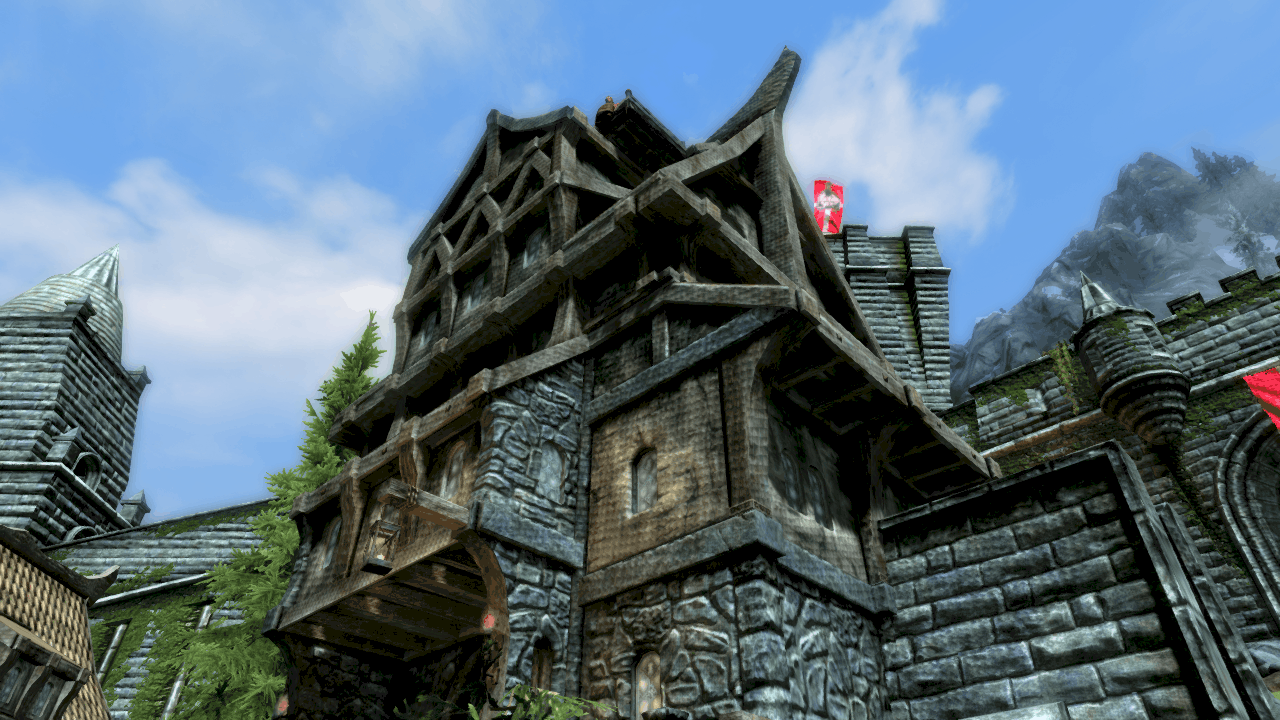 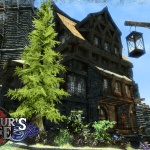 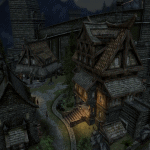 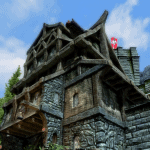 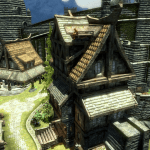 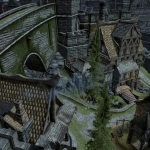 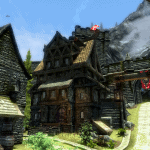 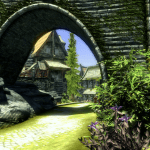 Wulftur’s Lodge is a living breathing part of Skyrim. It is a fully voiced and quested DLC sized mod that greatly enhances Solitude. Wulftur’s Lodge is a hall of adventurers that fills up the large empty space in front of Castle Dour. This mod has over 200+ lines of new dialogue edited from vanilla voice assets. So much inside, check it out!

﻿﻿Seek ye food or song unending? Find welcome here, and warm your soul! Welcome to Wulftur’s Lodge, a fully voiced, fully quested, DLC sized adventure and home mod. Wulftur the Brave (Wulftur Longhorn of Dragonbridge) is a hero of the Great War who won acclaim during the Seige of Bravil, and the Battle of Red Ring Road. For his heroism, he was given the honorific title ‘Regent of Skyrim’ by Titus Mead II, and allowed to keep his properties in Haafingar. Yet there have been rumors that there is more to this proud Nord than meets the eye – they say he is favored by SHOR, and that Wulftur’s Lodge is a place of special religious significance. Those who seek the blessing of SHOR should seek out Wulftur Longhorn, hero of Red Ring Road.

﻿There’s so many mods that add so much to this game – why add this one? Why should I try this mod?

Wulftur’s Lodge is made to be a living breathing part of Skyrim. That’s what inspired me to come back to it, to me it was like Wulftur and his hall of companionship was always a part of the game, that the giant empty spot in Solitude had to be the Lodge of Wulftur the Brave. So I finished the mod and simply filled in the blanks the ghosts in the machine gave me. ﻿Perhaps it’s being locked down from COVID19, or my own persistent (but entertaining) mental health problems, but I was compelled to complete this mod. There was a peace not yet found in the story, some conflict that has to do with the riddles of the symbols of not just Skyrim, but of the entire world. It is if a piece of us lives in this game (and all these games). What makes that so real in Skyrim in particular? Maybe the harshness of the land? The cold winter and treacherous roads? Maybe it’s the will of SHOR. I tend to think it’s the meeting of dumb/happy accidents. These are the narratives and stories you will find within Wulftur’s Lodge.

How is this different from WulfturKirasMerged?

﻿﻿This mod changes and adds different quests/NPCs from the merged version and removes all the player-vampire content of Kira’s Adornment and turns it into a dungeon that(still) interconnects to Potema’s catacombs, the Avenue Sewers, and other hidden areas. It is still a functional jewelry shop with the same intro quest (The Agronian Grotto playerhome from Kira’s Adornment is still available to live in).
﻿This mod is all about WULFTUR’S LODGE and the transformation of the Solitude Avenue without the adult/vampire content from WulfturKirasMerged, so I consider this far more lorefriendly (although all the same cells are resetsafe as they were before). There is now a Vigilant quest to explore the many areas beneath Kiras: the Dragon Vault, Wizard Lair, and interconnecting portal network. If you want the vampire version with the full ‘Mistress Kira’s Fine Adornment’,

~ Several main quests, 2 large dungeons, many sides quests, all sorts of various small quests
﻿~ 200+ lines of custom dialogue from vanilla voice assets expertly edited by me in Audacity
﻿~ Around 24 scenes of custom NPC dialogue scene events (some with vanilla NPCs)
﻿~ Fully working inn system, dozens of NPCs with full AI immersed in Solitude life.
﻿~ Several main characters, minor characters, quest givers, followers, summonables
﻿~ Dozens of new locations to explore, including 3 exterior locations, many new locations in Skyrim exterior
﻿﻿~ Large Arena to summon dragons and all manner of foul beasts for righteous battle
﻿﻿﻿~ One huge epic dungeon quest upon MORINTH SUMMIT where one may prove their worth to SHOR
﻿~ Many difficult enemies and bosses, challenging gameplay inspired by my favorite video games
﻿~ Many merchants, markets, fences, vendors, many unique items for sale you may want (see new assets)
﻿~ Many difficult mazes, riddles, puzzles, just as it should be
﻿﻿~ Kira’s Adornment, a jewelry story with a dungeon quest to discover the Dragon Vault.
﻿﻿~ New followers: a Vigilant on a mission, a proud Kahjiit outcast, a drunk Imperial deserter, many knights of yor…
﻿~ New spells, summons, teleport spells, shrines, new enchantments, skill books
﻿﻿~ Large portal network of portals/teleports that interconnect all the main areas
﻿~ Nearly 20K of written words of hand written background lore by me
﻿~ Extra lore I threw in just for fun (I put in resources) and new assets
﻿~ Large interconnecting sewer network that connects nearly all of the Solitude Avenue (perfect for sneaky characters)
﻿~ Many Easter eggs, hints, treasure troves, stashes, goodies and snacks

﻿I added a walk-through in the laboratory on top of the bookshelf. I included quest-markers in most of the quests, but not all have them. I left some out on purpose. You can buy hints from a character named ORSON who hangs around both the lodge and that jewelry store…

For most of the quests in Wulftur’s Lodge, you have to have completed ‘The Way of the Voice’, and have the Merchant Perk to shop with Wulftur and access the Lost Temple of SHOR. To access the Dragon Vault, you must complete both Vilenya’s quest and Vigilant Morina’s quest. Check the bottom of the page for a list of the main quests and how to start them.

Required Mods
This mod requires all DLC, and should have the Unofficial Patch as well, whichever one you use. I tested it with both the old Unofficial patches, and the new merged Unofficial Skyrim Legendary Edition Patch, and this mod will not work as intended without it/them. Either version works fine.

To Install
~ Use a mod manager, or drag and drop into your data folder.
~ Load on a CLEAN SAVE if you can (doesn’t have to be fresh start)

Issues
~ The .esp is still labeled wulfturkirasmerged because reasons
~ Many of the NPCs you need master trader perk to trade with
~ Bards may stop playing after a while, they’ll start when you reenter cell/reload save
~ There are deleted navmeshs, or else NPCS would walk on Wulftur’s roof. official DLCS have them too, don’t run with conflicting mods.
~ The Thurian Advent loads fine in clean saves – in certain unclean saves it seems to load weird.

Conflicts
This mod alters alot, mostly in the Solitude Avenue. If you have tons of mods that change Solitude and it’s interior locations, you should check your load order and use common sense. Obviously anything that changes the empty space east of the Solitude windmill arch will conflict.

There are now 4 exterior locations across Skyrim as well, and the sewer network adds secret passageways to a few vanilla locations – Proudspire, Bard’s College, Blue Palace, Castle Dour Emporer’s Tower, Hall of the Dead, and Potema’s Catacombs. They are not big changes, mostly just add a connecting entryway.

PERMISSIONS
﻿
﻿PLEASE don’t upload this anywhere else or alter it in any way without my permission, it should be 100% FOREVER FREE. Please message me with and comments or questions.

﻿This mod uses some great assets from great modders, the authors have given their permission to use on their pages: this mod now includes MT swords by Darkgondul, Elinora’s Resources by Elinora, Ingrediants Wallart by ﻿Blary, Open Books by stoverjm, and now Ultimate Assortment by flavordsoul. Another important resource in this mod was LazyVoiceFinder by bowmorelover.

﻿The lore in this mod is nearly 95% original, I just used extras since this is free, and for my own personal creative pleasure. The extra filler was from free literature around the web, just to beef up the books laying around (and some locations). Of course my favorite books are Tolkien books, so you’ll find many references to that in certain locations, but also included is some Shakespeare Sonnets, and some esoteric literature, particularly the Emerald Tablet of Thoth. This mod is in no way focused on that, and the lore within stands on its own, I simply wanted to fill in some corners. Also, for those familiar with Flavoredsoul’s mod Ultimate Assortment – you may know there are some LOTR items in it, so I included them and their appropriate background lore, INCLUDING a certain item Flavoredsoul never put in the game (not that I’m aware of) and that you’d only find if you had gone through the console – nevertheless in this mod I added that infamous item, as well as extra backstory to the other LOTR items. For the record, I just had fun because I really have no interest in profiting from this, which is why I only uploaded it here, so if it’s anywhere else, it’s really not cool, so I hope nobody ever pays for this.

Have you ever tried Skyrim Mods? All advanced players around the globe are fascinated by these additional options, which can solve various occurring issues. If you want to become a leading gamer, Skyrim Wulftur’s Lodge Mod can be the key to success and make this happen faster. All you need to do is pick the needed file and simply add it to your game. This provides you with unseen features and enables you to deal with your workload in a smarter way. There are so many different Skyrim Special Edition mods on our site that you will need some time to try at least some of them. But it’s definitely worth every second spent because your game is being lifted to the whole new level. Every Skyrim mod of our database is the highest quality and meets the strictest requirements. This ensures that our visitors get access only to the most exclusive and useful files. One of the best things we can offer for our visitors is unlimited access to the vast variety of extra files, which provides a wide range of benefits. It’s a significant surplus which is essential in being competitive. If that is your main goal, you should definitely try at least one Skyrim Special Edition Wulftur’s Lodge Mod file. You will be shocked how come you were missing this kind of important upgrades. But it’s never too late to give it a try and explore. Be one of the modern farmer and take the chance to all you can. These additional Wulftur’s Lodge files will enable you to choose between the best equipment, weapons and other functionality available. Could you miss that opportunity? We doubt that, so no more hesitating, make a decision right now and boost your game instantly. There won’t be any regrets or disappointments – make your farm the leading one right now!